This page is ready for review (reviewed by bh).

There are a lot of protocols! Here's a picture from Wikipedia:


You don't have to know about all of these! 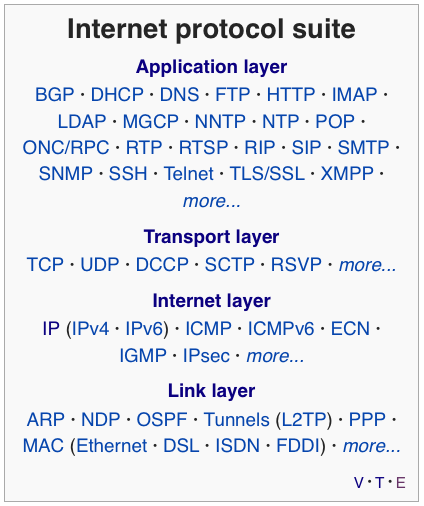 These are all open standards, which means that anyone can look up their details and build them into new hardware and software without getting permission. (For example, here is the IPv4 specification, but don't read it now.)

(Before the Internet, there were several different network protocols that were secrets belonging to particular manufacturers. So if you had a particular brand of computer or router, it could talk only to other computers of the same brand.)

Open protocols are another reason why the Internet is scalable.

The Internet is probably the largest and most complicated artifact in human history. And it relies on cooperation. Just think:

Despite some governments' attempts to censor the net, the big picture is one of strong cooperative spirit!

There are billions of devices connected to the Internet, and hundreds of different kinds of devices: laptops, tablets, phones, refrigerators, handheld credit card readers that the waiter brings to your table at the restaurant, and so on.

How do they all know how to talk to each other? The Internet was designed with several levels of abstraction. Here's an only slightly simplified picture:

Review and improve your understanding of the abstractions of the internet: