This fractal is called the Koch snowflake:

The Koch snowflake consists of three copies of the Koch curve, arranged along the sidea of a triangle: 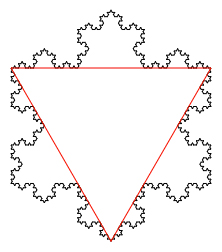 Unlike tree and triangle fractal, this one does not return the sprite to the same place after each recursive call. It replaces a straight line with a bent line.

The base case is just the line:

At the next level, the straight line is replaced by four lines, each one third the length of the parent, arranged this way.

Each new level replaces the straight lines of the previous level with bent lines, exactly the same way.


The red color was added here to make the previous level more visible. Your version can be all one color.