The Real Value of the Repeat Block

It is, of course, much easier to create this script...

...than to create this one: 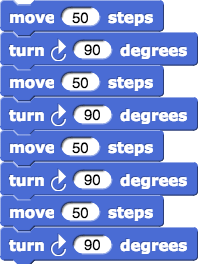 Even more importantly, using repeat makes the structure of the program clearer. This is essential to good coding. Clearly structured code is easier to understand and easier to debug (to catch and fix errors). In the longer script above (without repeat), we'd have to count the parts to see if it's right. And it would be very easy to make a mistake if we were drawing a 20-sided figure instead of a 4-sided one!

The Repeat Block Self Check

Through how many degrees did your sprite turn altogether when you drew a pentagon?

What's the smallest number you can put into the blank numeric input of the repeat block below to produce this picture? 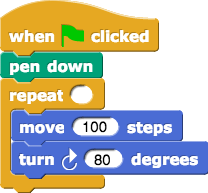 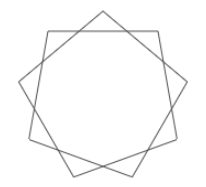 Make small enough sides so that the shapes can fit on the stage. With more and more sides, the polygons get closer and closer to a circle. Is there a point at which the result is a circle?