Go to Table of Contents

This page will help you think deeply about the Create Task instructions from the College Board.

Showing Your Code for the AP Create Task

Snap! has two convenient ways to share some or all of your code.

You can download a PNG image file of any block or script by right-clicking it (or control-clicking it on a Mac) and selecting "script pic..." Look in your browser's Downloads folder for the image file.


If you shift-right-click (or shift-control-click) on a reporter block, you will get a script pic of the reporter with it's report bubble showing.

Exporting All the Images at Once

You can download an HTML file of all of the blocks in your whole project as well as a picture of the stage by selecting "Export summary..." from the Snap! File menu (

). The HTML file also land in your browser's Downloads folder. Open it (in a browser), right-click (or control-click on a Mac) to copy the images you need, and paste them into the document where you are describing your code. 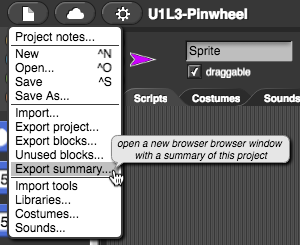 Describing Abstraction and Algorithm for the AP Create Task

You've been creating algorithms and using abstraction all year. All you need to know for the AP test is how to call attention to and describe what you've done.

In Unit 1, you created an algorithm for drawing this pinwheel shape: 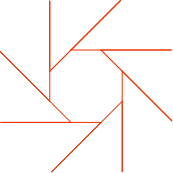 The shape consists of eight line segments, each the same length. The first segment is 100 steps long. To prepare for the next segment, the sprite backs up 70 steps along the first segment and turns 45 degrees to the right. Each new line segment follows the same pattern: move 100, move -70, turn 45. It could be written using eight sets of those three blocks (as shown at right). That is the algorithm, but it's hard to read. For one thing, it's hard to tell whether all the blocks are there. Using repeat makes the algorithm clearer, briefer, and easier to read. This is how the algorithm is now expressed:

Your program for the AP task will have different algorithms (stretches of code that accomplish a particular purpose), and you can point to any chunk of code like that in your program as an example of an algorithm.

Changing both eights to fives in that algorithm would create a pinwheel with 5 branches. Instead of changing the numbers each time you wanted a new pinwheel, you created a block that contained the algorithm and let you just input whatever number of branches you want:

The abstraction of pinwheel helps in three ways:

When you create a block and give it a name that describes its purpose, you are creating an abstraction. You are hiding the details and showing only the purpose. When you use that pinwheel block, it shows the structure of your program more clearly. Someone reading your program doesn't need to figure out what the details inside pinwheel do; they can tell from the name that it makes a pinwheel with a given number of branches.

Note that while packing your entire program into a single block might the page cleaner, it is not a good example of abstraction. The best examples of abstraction to highlight for the AP are pieces of code that you use multiple times in your program and are clearer because they are packed into a well-named block. You can often use what's in that block as an example of the algorithm for the purpose that the block serves.