In this lab, you will program two sprites to gossip. 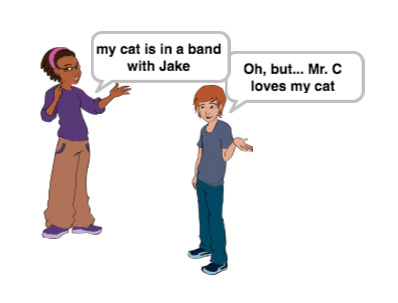 On this page, you will experiment with an existing program as an introduction to the project.

You'll need to be logged in to save to your account. You may wish to review how to log in at Unit 1 Lab 1 Page 1: Getting Started with Snap!

on the AP Exam because they don't have sprites and speech balloons, but their way of showing this text to the user is if it's written as text or

if it's shown as blocks.

In the Settings menu (

Abstraction is the most fundamental idea in computer science, but it's hard to define until you've seen some examples. The most basic kind of abstraction is to give a name to something in a program. For example, here we gave the name who to the idea "pick an item at random from this list of people (or cats)." This is called procedural abstraction because we use a procedure (a block) to name the idea. This makes your code readable. You'll see other kinds of abstraction later.

If you find yourself wanting to copy and paste code from one place to another without changing it, then give it a name (open a Block Editor and paste the code there) and call your procedure in both places. If you discover later on that you need to fix a bug in this code, you only have to change it once instead of finding every copy throughout your program.

The broadcast block sends a message to all the sprites. To set the message, click the down arrow and select "new..."

For more information about the when I receive block, right-click (or control-click on a Mac) the block and select "help..."