On this page, you will use inputs to allow one block to do many things.

On the previous page you used blocks asterisk and pinwheel that we wrote for you, each with an input for the number of spokes. Now you're going to learn how to create your own blocks with inputs.

The scripts are essentially all the same; only some of the input values change. Instead of having many separate scripts, you can make one general block

that will draw all such designs. The block has to work for a variety of inputs.

: What's an input? Parameter vs. Argument
AAP-3.A.3
We use the word "input" both for parameters (input names) and for arguments (input values).
AAP-3.B.4

Originally, you made five copies of the pinwheel script to create five slightly different pinwheels. Now, you've made a single procedure that includes the shared features of these five scripts and uses a parameter to handle the differences.

Adding comments to your code may help you remember what your code does, helps other people reading your code to understand it, and can help you avoid bugs by increasing the clarity of your program. But it won't do any of those things if you comment every line of code, so each comment just says how a block inside your script works. You can add comments to your Snap! code by right-clicking (or control-clicking) in the Scripts area and choosing "add comment." Click for an animation that shows how.

You can attach a comment to the hat block in the Block Editor to create a help message for your block. This is the best way to comment, because people can find out what your block does without having to look inside, just like the help messages for primitive blocks. 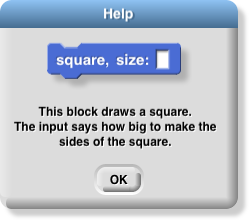 Part of the reason some people emphasize the importance of detailed comments is that they are programming in text languages, which discourage long variable and procedure names. (Typically, you can't include spaces in the names, and you have to type the entire name every time you use that variable or procedure.) So you see names like substLcUc instead of substitute lower case letters for capital letters in string. If a program is full of drastically abbreviated names for procedures and variables, it's no surprise if the code needs documentation. In Snap!, the names in the program can be self-documenting.

Commenting is only one form of documentation. It's not the best form, because attaching a comment to a particular place in the program documents only that one procedure or code segment, and doesn't explain how different sections of the program interact. But commenting is an easy way to document small details.

If you're writing a program by yourself, internal documentation may seem silly. "I know how my own program works." But if the program will still be in use a year later, it will probably need maintenance, and you may well have forgotten the details of its implementation. In a programming class like this one, most of the programs you write are very small, and you can understand them at a glance. But real programs are generally much bigger than lab exercises designed to take less than an hour of work.

It's best if the first attempt at documentation is made even before starting to code. The documentation will specify the desired program behavior (external) and the intended program structure (internal). These documents can be used in testing the code to ensure that it behaves as planned.

When you embed a command procedure (such as pinwheel) within a script, the procedure is completed before continuing the script that called it.