PG: This /has/ a learning purpose. It's lost in "optional." The learning purpose is couched in machine generation of language, but the content/programming goals are also practice of old, learning new, and foreshadowing. The important "new" is the essential element of problem decomposition and abstraction: this problem is too difficult /without/ decomposing it, but perfectly tractable /with/ decomposition. And then, perfectly extensible to Spanish or...

Brian and Mary are considering possibly one day making these two pages into a non optional lab before or after Lab 4. --MF, 1/2/21

Siri and other robots are programmed to generate language. Siri speaks; some robots write. You have developed a program, gossip, that writes. In this project, you will extend the computer's abilities with language by developing a reporter block, plural, that takes a noun as input and correctly spells and outputs the plural

Spelling a plural can seem almost automatic for a person, but it is not simple: a computer needs an algorithm to do that task.
This project uses blocks already loaded for you from Snap!'s "Words, sentences" library. You can load a library from the Snap! File menu

for the project, but you might find it interesting to try it not only with "when," as an input but with "where," "what," "wherefore." Linguists use evidence like this to understand the history of a language.
Choose the reporter button when you make plural. 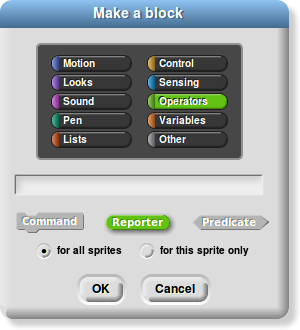 You can do the same for conjugating verbs in Spanish or some other language you choose. See the Take It Further section at the bottom.

The next two steps are worth learning—very useful for testing plural and in more advanced work later on—but not essential for building plural.