Who Cares About Encryption?

BH: … although we're going to want to update the list of articles periodically.

On this page, you will consider some of the impacts of encryption on society. 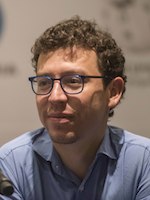 Luis von Ahn (born in 1978), one of the pioneers of crowdsourcing, is a Guatemalan entrepreneur with a PhD in computer science. If you've ever had to click a box or identify images to confirm you are not a robot, you've used technology based on the work of Ahn's digital security company reCAPTCHA. reCAPTCHA protects websites from fraud and abuse with minimal disruption to user experience. After selling reCAPTCHA to Google in 2009, he co-founded the popular language learning platform Duolingo, which as of 2020 had over 500 million learners across 39 languages.

Article: 'I Just Want to Have an Impact'