On this page, you learn about different data compression algorithms.
DAT-1.D.1

The size of data (the number of bits required to store it) affects the time it takes to send that data across the Internet. So, people use data compression algorithms to reduce the size of images, sounds, movies and some other kinds of data.

The amount of size reduction depends on two things:

There are two broad categories of data compression algorithms: lossless and lossy, depending on whether information is lost.

Lossless data compression algorithms (such as PNG) are reversible (there is no loss in quality); you can reconstruct the original data.

Lossless compression works by removing redundant data. These algorithms can usually reduce the number of bits required to store or transmit the data while guaranteeing that the original data can be perfectly reconstructed.

Run-length encoding is an example of lossless compression. Consider the 158 pixels in the top row of the BJC logo (at right). The first 60 pixels are white. Then come five pixels of yellowish orange (the top slice of the "b"). And the rest of that row is white.

Instead of storing all 158 pixels individually, we could compress them with run-length encoding and just store six values (three numbers and three colors):

Those six values (60, FFFFFF, 5, E5A84A, 93, FFFFFF) can be reconstructed into that whole first row of the image (158 pixels). So, fewer bits does not necessarily mean less information.

Lossy data compression algorithms are not fully reversible; you can reconstruct only an approximation of the original data.

Lossy Compression works by removing details that people aren't likely to notice. The most commonly used lossy compression algorithm for pictures is called JPEG (or JPG, both pronounced "jay peg" for "Joint Photographic Experts Group," the committee that invented it). JPEG works by preserving most of the brightness information for each pixel (since human eyes are sensitive to that) and performing a kind of averaging process to the color information (because human eyes aren't as good at distinguishing color, especially colors close to white).

Below are an original, uncompressed picture of pebbles in a pond and a highly compressed JPEG of the same image. Can you tell which is which? 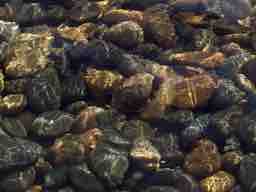 You probably can tell which is which, especially if you looked for sharp edges or very shiny spots. But the compressed file uses 1/30th of the space used by the original, and you could still tell that it's a picture of rocks. So, for many purposes the compressed version would be good enough. Lossy algorithms usually let you control the degree of precision, and generally, people select less extreme compression settings, so the compressed file looks much more like the original than this example.

What size is this file when encoded in different formats?

Here are the sizes of the pond pebbles picture in four different formats:

The MP3 format, which you almost certainly use for portable music files, is a lossy compression format. It tends to emphasize high frequencies, so people accustomed to MP3 music find uncompressed versions of the same music boomy (bassy).

Both types of data compression exist because each is useful in certain circumstances: