MF: lightly clean up to make the text more concise

Do we have any interest in salvaging the logic gates/XOR project that Selim and I worked on? --MF, 3/25/19

On this page, you review three Boolean operators (and, or, and not) and learn how they relate to electronic circuitry.

Memory is made out of flip-flops. A flip-flop is a circuit that has two stable states, on and off. An input signal can tell it to turn on, turn off, or change whatever it's state is. Once that happens, the flip-flop stays in the new state until it gets another signal. It has an output that reflects its state: on if the flip-flop is on, off if it's off.

The circuits to do computation are more interesting. They compute functions, just like reporters in Snap!. Since computers do a lot of arithmetic, you might think that the basic circuit functions would be addition, subtraction, multiplication, and division, but that's not the case. Of course there are circuits to do those things, but they're made out of logic gates: circuits that compute Boolean functions: and, or, and not.

You saw some examples in Unit 2 Lab 3: Making Decisions by Using Predicates: AND, OR, and NOT:

Some other ways to think about Boolean operators: It is possible to emulate Boolean operations electronically and these operations are sometimes represented as truth tables (either with true/false or ones/zeros).

Inside a computer, Boolean operations are implemented in physical circuitry using logic gates. (A single gate implements one of the basic functions and, or, or not.) Logic circuits are often represented with drawings that help engineers see how the information will flow through a circuit. For example, the following diagram of a logic circuit with two gates represents the Boolean expression

On the previous page, you learned about tungsten and tin, and here we're talking about Boolean functions. In what sense is this less abstract? From the point of view of the chip designer, logic gates are the fundamental building blocks of a digital circuit. (The actual physical chip fabrication is at an even lower level of abstraction, in the analog domain.)

How do engineers draw logic gates?

For example, engineers would draw the logic circuit shown at right like this: 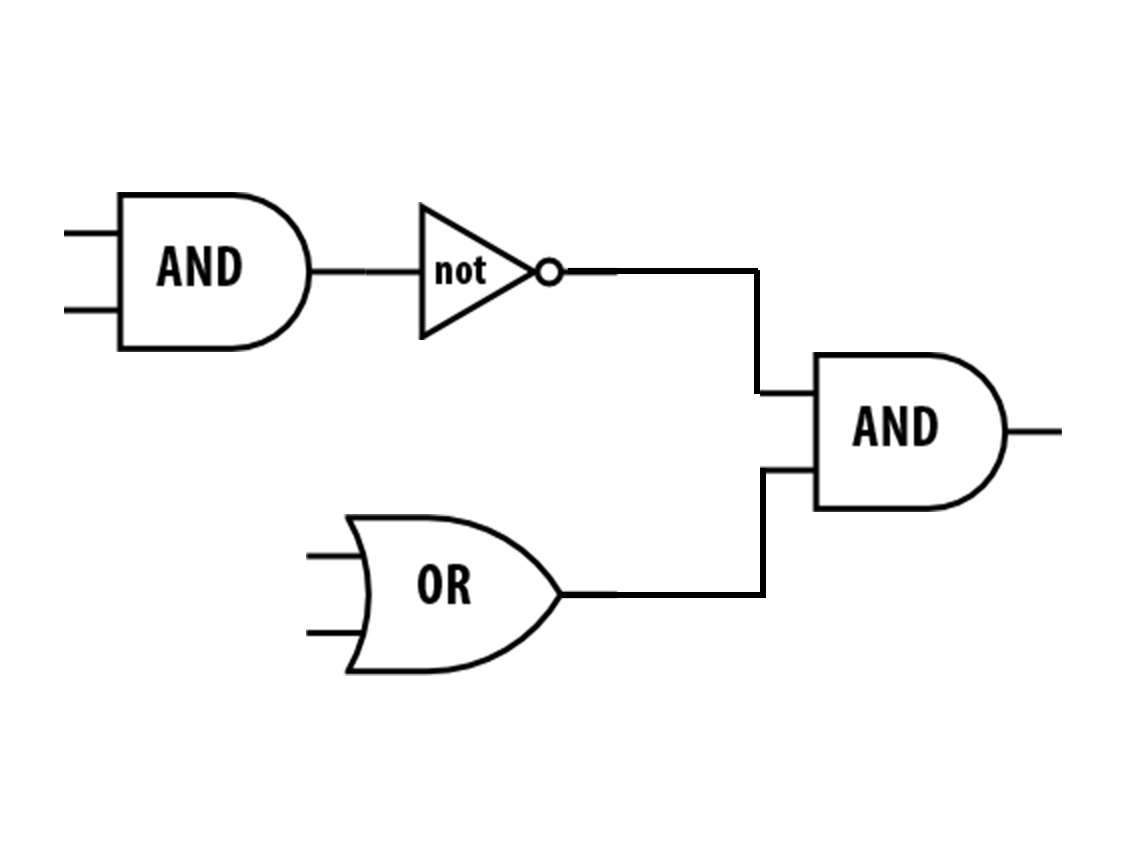 Do an image search for "logic gate diagrams" to see more examples.
There is a commented out ifTime here that would link to the adder project. I think we should add it back in as a TIF once that optional project is done. --MF, 11/30/17